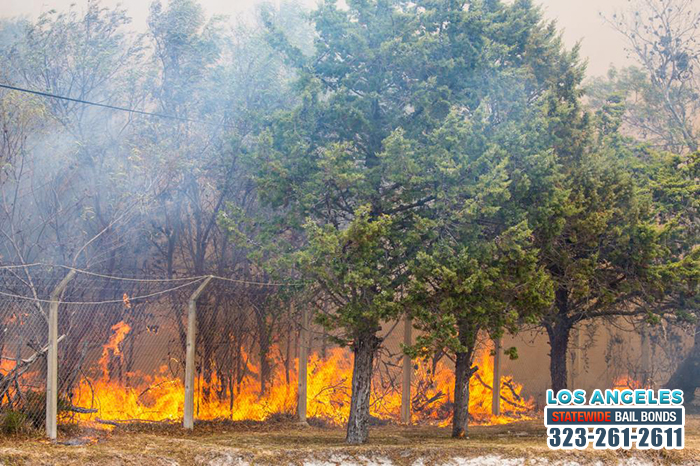 11 Apr As the Weather Begins to Warm Up Again, Wildfires Become a Real Possibility

Smokey the Bear is a famous figure in our nation. He’s taught us campfire safety, as well as wildfire knowledge. Smokey the Bear doesn’t want his forest to go up in smokes. We know that a single match can cause a wildfire, but there are also other things that can cause wildfires.

A wildfire is classified as an uncontrolled fire in a natural area, and there are a lot of things that can cause wildfires. An unmonitored bonfire, a tossed cigarette, or a still warm campfire are obvious causes of a fire. They can start from a house, or from a controlled burn getting out of control. When a wildfire gets going it can spread to your neighborhood, or other populated areas causing thousands of dollars in damage.

Wildfires are dangerous and Wildfires are fueled by the surrounding landscape and weather. That is why following evacuation orders is extremely necessary. The smoke from the fire is hazardous to our health, as well as the heat of the flames themselves. Wildfires burn everything in their paths, which can leave a trail of destruction that can cause mudslides later on in the year.

Californians are no stranger to fires. The weather and environment in California is perfect for wildfires. This is why we have a wildfire season every year. When we have hot dry weather the vegetation dries out, which creates the perfect environment for a wildfire to ignite. All it takes to start a wildfire is a single spark.

Smokey the Bear wants us to take preventive measures to hopefully avoid a wildfire altogether. According to Smokey the Bear in 2016, 60,932 human-caused wildfires burned nearly 4 million acres.

If we can cut that number down, think about all the wildlife we’d be saving on top of the homes and lives. Don’t let California go up in smoke this year. Take preventive action to help avoid wildfires.